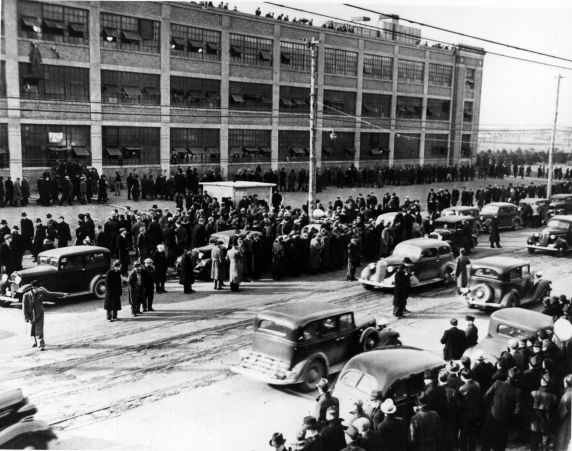 The current United Auto Workers (UAW) strike against General Motors (GM) is in its second week. Most news stories have commented on the length of the strike (eleven days as of this posting) which is the longest in recent history. Additionally, this is the first strike the UAW has called against General Motors in over 10 years. The negotiations are taking place at the General Motors headquarters in downtown Detroit, and news coverage has used film of the strikers outside the headquarters – along with plants in Hamtramck, Detroit, Flint, and Orion, Michigan and Lordestown, Ohio – as b-roll. Coverage of the strike includes the UAW’s demands for a fund to help with bills and childcare expenses for striking workers and stipends for those walking the picket lines, GM’s likely concessions, and the strikers’ comments on the current plight of the American auto worker.

Missing from this onslaught of media coverage, however, is any discussion of the historical roots of the UAW’s current GM strike. The current strike would need to continue for another 35 days – 5 weeks – to equal the UAW’s most prolonged strike. In fact, the UAW’s first strike against GM was by far the longest, and, in that strike, we can see the roots of the UAW’s demands and strategy today.

In the winter of 1936, the UAW was a fledgling union. Only a year prior, John Lewis and other members of the American Federation of Labor (AFL) split from their parent union to found the Committee for Industrial Organization (CIO). After the AFL’s failure in the preceding years to address the needs of the industrial workers of the auto companies, the CIO eagerly supported the brand-new United Auto Workers in their quest for unionization for mass (as opposed to craft) workers in the country’s auto plants.

The 2019 strike against GM began because the UAW chose the company as its first target for contract renegotiations, reflecting the union’s belief that they could extract more from GM than the other two major automakers in Detroit – Ford and Fiat Chrysler (FCA) – and therefore put themselves in a better bargaining position when negotiations commenced with those companies. In 1936, the UAW also chose General Motors for its first major strike. Then, geography played an important role: GM plants around the country experienced spontaneous (though unsuccessful) strikes, and support for a major strike coalesced in Flint, Michigan, where GM was headquartered.

The different catalysts for the 1936 and the current strike indicate how powerful and influential of the UAW has become, a far-from-inevitable development from the standpoint of 1936. In 1936, after GM fired three workers for refusing to quit the union, and in the wake of months of anti-union actions by the company, the UAW finally called for a strike in GM’s Fisher Plant 2 in Flint, Michigan just after midnight on December 30th. The next day at lunch, workers in Fisher Plant 1 in Flint joined the strike. Strikers sat down (the Flint strike remains the most famous example of a sit-down strike in this country) to demand their right to union representation. They needed GM to acquiesce to that representation before they could even begin negotiating the terms of an agreement that would address the availability of work, the rate of pay, and the disputes over seniority that caused many workers to join the strike. The UAW voted for the current strike after General Motors did not offer their first serious offer at a renegotiated contract until two hours before the current one expired, leaving little time for the UAW to respond.  A failure of renegotiation, rather than representation, therefore instigated the current strike, but the readiness to strike owes much to the ground-breaking 1936 strike, as well as the strikes since then.

The beginnings of the strike are not the only areas with historical antecedents in the 1936 Flint strike. In 1936 (and, as the strike wore on, 1937), General Motors attempted to intimidate and cajole strikers into giving up their efforts and coming back to work. This often meant harassing strikers’ families by sending company goons to pound on the window of a striker’s home in the middle of the night and by threatening strikers with eviction from company-owned homes. Although GM has not stooped so low during the current strike, it did announce its intention to cancel the healthcare coverage of approximately 49,000 workers two weeks before their current health plans were due to expire at the end of September. Although GM has subsequently announced the reinstatement of UAW workers’ healthcare, their initial decision to revoke it can only be read as an attempt to break the will of UAW members.

The 1936 Strike’s (not so) Secret Weapon: The Women’s Auxiliary

In recent news stories covering the beginning of the current strike, many reporters mentioned the UAW’s strike fund. This fund – paid for by members through their dues –supports union members in case of a strike. Out of the fund, strikers receive a $250 weekly stipend and some healthcare coverage. Again, we can locate the roots of this particular labor strategy in the 1936-1937 strike in Flint. Before the inaugural strike began, the women of Flint began creating their own auxiliary to the UAW. These women often had a direct connection to the union or the company – either from their employment with GM or through their male relatives. The auxiliary took responsibility for much of the reproductive labor – the care work that makes a household run – that the sit-down strike required. They operated the strike kitchen, provided daycare, ran the first aid station, and visited the families of striking workers. The auxiliary’s more militant division – the Emergency Brigade – and its contributions to the Flint strike are well known, having been the subject of a documentary called “Babies and Banners.” However, the women of the auxiliary’s rank-and-file provided less sensational but important labor that undergirds the UAW’s support of its strikers today. In 1936, it was not the UAW itself but its women’s auxiliary that provided childcare. And the auxiliaries would continue to advocate for the provision of childcare for industrial workers during World War II. At this point in the current strike, the UAW has not demanded childcare as a contract provision, but its willingness to pay for the childcare of its striking members can be traced to the auxiliary labor that made childcare a union issue.

The current UAW strike against General Motors is certainly less dramatic than its first strike in 1936. There are no workers making history by sitting down in the plants, no Michigan National Guard keeping watch over strikers to prevent violence between them and city police, and no Women’s Emergency Brigade marching down Woodward Avenue in Detroit. However, the lack of history-making drama is not a poor reflection of the commitment of union members – rather, it is a testament to the power the UAW has wrested from the auto industry over the last eight decades. Journalistic warnings that a strike lasting longer than two weeks would hurt GM’s stock price (while important to current GM workers who are stockholders) would have only made UAW members laugh in 1936 – they couldn’t rely on a regular paycheck, much less stock options. GM would do well to remember the historical roots of the current strike: a belief in the power of collective bargaining and the determination of the American worker to be treated – and see their fellow worker treated – fairly. The UAW’s steel spine may bend, but it is unlikely to break.