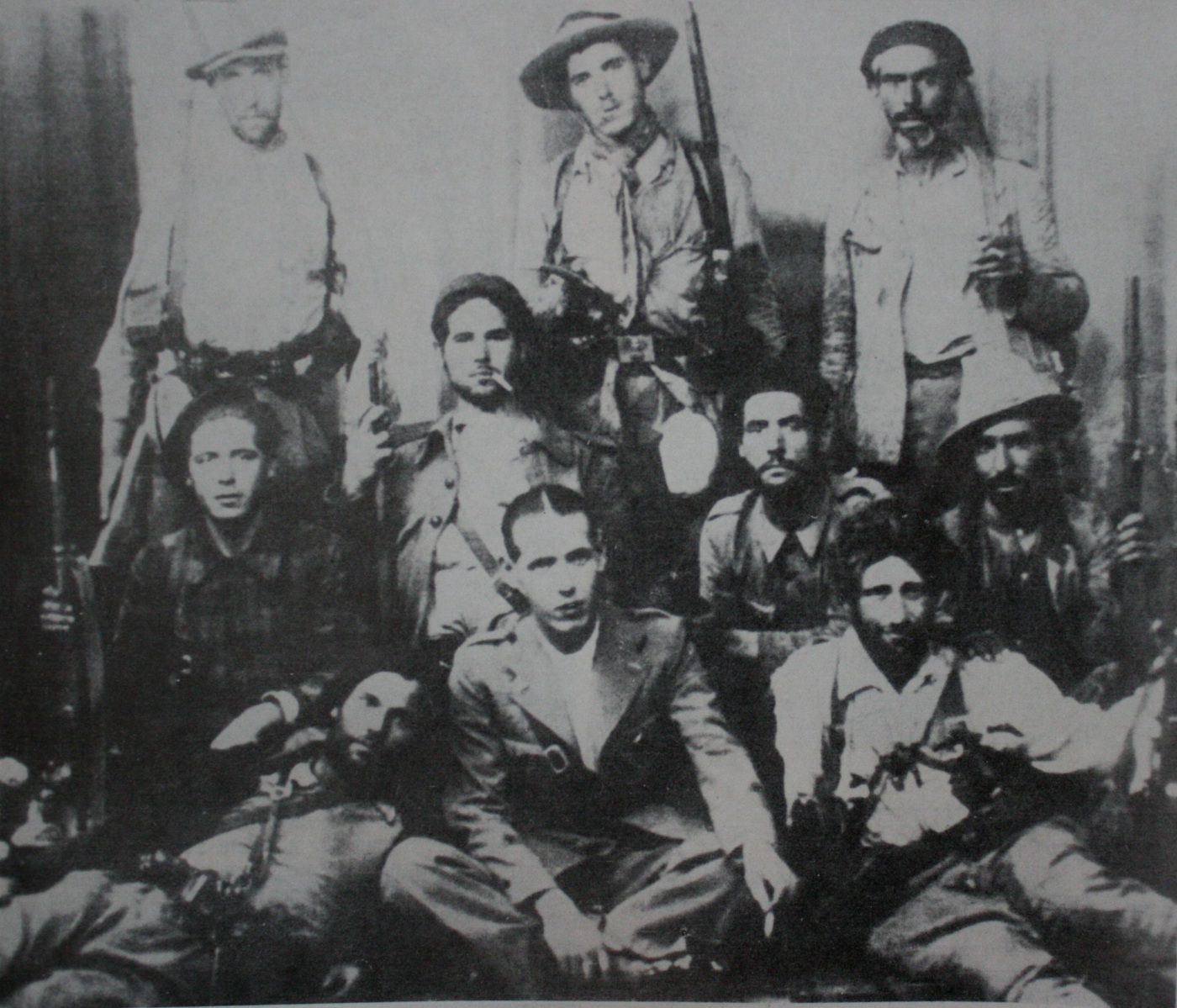 After years of speculation and months of build-up, Russian military forces invaded Ukraine on February 24, 2022. On February 27, Ukrainian Prime Minister Volodymyr Zelensky announced the formation of the “International Legion of Territorial Defense of Ukraine,” a new unit within the Ukrainian military designated for foreign volunteers. In his call for foreign fighters, he wrote, “Anyone who wants to join the defence of Ukraine, Europe and the world can come and fight side by side with the Ukrainians against the Russian war criminals.”[1] Less than a week after Zelensky’s initial call, Ukraine’s government launched a website where potential foreign fighters can, according to Radio Free Europe, “find a detailed, step-by-step instruction on the website on how to join the just fight with the aggressor.”[2] There is no requirement that volunteers have prior military experience. The process for joining up begins with contacting a Ukrainian Embassy and culminates in the volunteers’ arrival in Ukraine, where they “Join The International Legion Of Defense Of Ukraine (Sign The Contract) And Engage The Russian Occupiers Together With Fighters From All Over The World And Ukrainian Soldiers.” While it remains to be seen how many foreign volunteers will ultimately join the defense of Ukraine, some 16,000 people had taken the first steps by March 3, and more than 1,000 volunteers from 16 countries had begun making their way to Ukraine by then.

Many of the initial volunteers belong to the Ukrainian diaspora and feel compelled to return home to fight for their homeland and their families. As one of them put it, “I will be ashamed if I do not come back to help.” Apart from the official push for foreign volunteers, Ukrainian officials estimate that more than 80,000 people (most of them men) had crossed into Ukraine during the first days of the war. Many of them are believed to have enlisted in the Ukrainian military, which grew from 261,000 troops to 361,000 in less than a week. Ukraine’s border security service explained, “Patriots who have worked or temporarily lived abroad are coming to Ukraine to join the armed forces, other military formations and territorial defense forces.”

Some volunteers have no direct ties to Ukraine—what explains their desire to leave home to fight someone else’s war? Many of those interviewed about their motivations recall the period before World War II, when Britain and its allies employed a policy of appeasement in the face of obvious German aggression. According to one British volunteer with military experience, “This is, in my opinion, the biggest threat to Europe since 1939. . . . Everybody knows that Russia has bigger plans than Ukraine. . . . If they are not stopped now, when will they be?”[3]

Numerous commentators have drawn a connection between the present wave of volunteers headed to Ukraine and the International Brigades, foreign fighters who went to defend Spain’s Republican government in the Spanish Civil War. It is still too early to make grand comparisons, especially writing in the first months after the Russian invasion of Ukraine, but a look at the experience of those who went to fight in Spain may be instructive in understanding the role of foreign military volunteers.

The Spanish Civil War began as a failed coup on July 17, 1936, when a disaffected faction within the military coordinated with right-wing extremist groups to overthrow the left-wing government of Spain’s Second Republic, which had been established in 1931. The Republic had seen five years of political conflict, and the rebels who initiated the war opposed the Republic’s attempts to create a modern, secular, democratic system of government. They viewed the conflict as a war between Spain and “anti-Spain,” framing their uprising as the beginning of a new Reconquest intended to re-establish the Christian foundations of Spanish society.

It quickly became clear that the rebels’ plan for a quick takeover of Spain’s government had failed. They had miscalculated their strength, and in areas of the country with a strong left-wing presence, like Madrid and Barcelona, the initial uprising floundered. The intended leader of the uprising, General José Sanjurjo, died in a plane crash as he returned to Spain from exile in Portugal. A key component of the rebellion, the Army of Africa, found itself stuck in Spanish Morocco when the Spanish Navy largely stayed loyal to the Republic. In the month after the uprising, the battle lines hardened, establishing clear Republican and Nationalist zones.

In contrast to the international outcry over Russia’s invasion of Ukraine, the primary international response to the outbreak of war in Spain was non-intervention. The war in Ukraine has not (yet) led to direct military intervention by other governments, but numerous countries have supported Ukraine’s defense by supplying war materials or training soldiers. The widespread opinion that the Russian attack on Ukraine’s sovereignty is a threat to the post-World War II international order has caused even Germany to authorize arms shipments to Ukraine in a reversal of a longstanding policy against sending weapons abroad. When the Spanish Civil War began, by contrast, the international community established an official policy of non-intervention. The United States maintained the isolationist policies adopted after the first World War, while Britain and France led the establishment of the multilateral Non-Intervention Agreement. The agreement, however, lacked serious enforcement provisions, which opened the door to major violations.[4]

Italy and Germany were the first, and most significant, violators of non-intervention. In fact, both of these countries had begun supplying the Spanish rebels with aid within the first two weeks of the war. When the Army of Africa, led by Francisco Franco, needed transportation across the Straits of Gibraltar at the end of July 1936, Italy and Germany sent planes to ferry troops, followed over the next few months by more planes and pilots. Both countries signed the Non-Intervention Agreement in August but never stopped aiding the rebels. When their violations of the agreement resulted in no punishment, both countries increased their commitment. Italy sent nearly 80,000 “volunteers” to Spain during the war as part of the “Corpo Truppe Volontarie,” including large numbers of front-line troops. Most of the 10,000 Germans who went to Spain were pilots, specialists, or technicians.

Even as Italy and Germany openly violated the Non-Intervention Agreement in support of the Nationalist rebels, most other signatories maintained their decision not to intervene. This was partly because the Spanish Republic’s governing Popular Front alliance was connected to communism in the minds of many international observers. As the rest of the world stood still, Josef Stalin decided to aid the Spanish government, with the first Soviet weapons arrived in September 1936. In order to maintain a façade of non-intervention, Soviet aid to Spain was funneled by the Communist International (Comintern) through international front organizations like Socorro Rojo Internacional and The International Committee for Aid to the Spanish People.[5]

There was an extremely high death rate among the International Brigades, with an estimated 15,000 of these volunteers killed over the course of the war. One reason for this was a general lack of military experience on the part of volunteers. They were put into units organized by language, for ease of communication, but they were not given sufficient training before being sent to the front. Once deployed to the front lines, they were often poorly supplied or ordered to undertake impossible tasks. In the April 1937 Battle of Jarama, for example, they were “ordered to storm a fascist-held ridge south of Madrid without any artillery support.”

Why did foreign volunteers without military experience go to fight in Spain? Most of them joined up for ideological reasons. Given the connection between the International Brigades and the Comintern, it is not surprising that most of the volunteers were communists, though there were also non-communists among them. Many volunteers viewed the war as a chance to stop the spread of fascism. One member of the Abraham Lincoln Battalion, the American unit of the International Brigades, wrote, “Here finally we have weapons, here we can fight back. Here, even if we lose, which possibility we will not admit, in the fight itself, in the weakening of Fascism we will have won.”[6] Other American volunteers joined because they did not feel welcome at home in the United States: African-American volunteers felt more respected fighting in Spain than they did at home, for example.[7]

Potential American volunteers to Ukraine have been told that they are legally allowed to sign up, but the United States government has strongly urged them not to do so. In the Spanish Civil War, American volunteers were told they could not legally fight for Spain and were threatened with loss of citizenship when they tried to do so. Milt Felson, an Abraham Lincoln Battalion veteran, described traveling to France with thirty-six other American volunteers, only to be met by a representative of the US State Department, who warned that enlisting in a foreign army was grounds for having their American citizenship revoked and offered to pay for their return passage to the United States.[8]

The legacy of foreign volunteers in Ukraine will be determined in the decades to come, and will be shaped by how history ultimately remembers the war in Ukraine. In the case of foreign volunteers in the Spanish Civil War, however, there was been a great deal of evolution in their perception in recent years. In the United States, the association of the International Brigades with communism made them suspect in the eyes of many politicians for the rest of the twentieth century. When Abraham Lincoln Brigade veterans joined the military to fight in World War II, for example, the notoriously anti-Communist House Committee on Un-American Activities tried to stop some of them from being commissioned in the US Army.[9]

The Veterans of the Abraham Lincoln Brigade (VALB), formed in 1937, occasionally found itself in conflict with the federal government. In 1947, two years after the conclusion of World War II, the Attorney General of the United States declared the VALB to be “subversive and communist,” and in 1955 the Subversive Activities Control Board, a government committee created to root out communist subversion in the United States, labeled it a “Communist-front organization.”[10] The Franco regime’s committed anti-communism became more important to the United States and its allies throughout the Cold War. Because of this, Ronald Reagan felt comfortable saying that the Americans who had gone to fight against fascism in Spain had fought on the wrong side of the conflict, apparently forgetting about the involvement of Nazi Germany in the Spanish Civil War. And yet, when Delmer Berg, the last-known surviving veteran of the Abraham Lincoln Brigade, died in 2016, Senator John McCain penned a tribute to Berg in the New York Times, titled “Salute to a Communist,” in which he praised Berg’s service in Spain while decrying his communist politics.

One cannot predict what impact foreign fighters will have on the outcome of the war in Ukraine, and it remains to be seen whether they will be used as political footballs by politicians when they return home. Perhaps the experience of the International Brigades will serve as a lesson for them.

Featured Image: “Under the Red Banner: A unit from the Bulgarian International Brigade under the command of Ivan Bitsov, Spanish Civil War, 1937.” Photographer unknown. Retrieved from Wikimedia.org.